"... Zune team had a second TV ad coming, similar to the first, showing a guy in a bus holding a Zune 80 instead of a Zune 8 in the first one. He also dives into his player, in a fantasy world, views his photos and does some amazing stuff with friends." 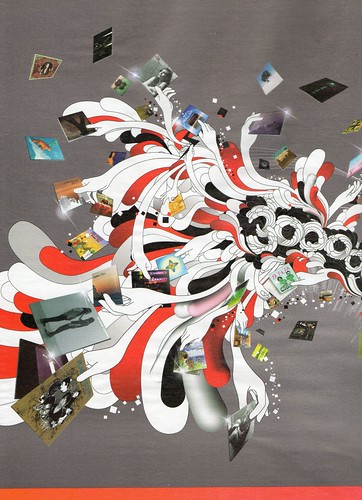 I like it, I actually like it. While every bit as weird as the first, this one seems to have a stronger emphasis on the experience one has while using the device, and less on kangaroos and pink mouse furries. Depicting the photos as coming alive was a cool metaphor, and I think the transition from real-world to Zune was also much clearer. Plus, the commercial was just plain cool.

On the print end of the spectrum, the second Zune2 ad is fairly similar to the initial one, minus about 3 pages. If you hadn't already heard, the new campaign launched in several big-time magazines with a gigantic 5-page foldout spread—talk about showing off! Personally, I think it looks a bit too much like XP's print campaign (example), but with weird flowing liquidy hands instead of a DNA double helix.

The only thing I hope is that future Zune spots attempt to be a little less creepy. As Zune-Online's Kostas so fittingly put it, "Personally I like the print ad below, but I can tell this about the slogan: I won't make it me."

Check it out for yourself: